Matilda "Mat" Anastasia Carvel is a very talented and ambitious portrait-painter, but she's also young and naive. After ditching her dysfunctional Arkansas family and helping herself to a new wardrobe from a Salvation Army dumpster, she runs away to New York City.
Mat soon finds herself engulfed in the chaotic pace of Manhattan. Between sharing a roach-infested basement apartment with two ditzy sisters, a rich bag lady, and a cross-dressing gay couple, she winds up supporting the slackers by painting portraits of customers at Tony's Pizzeria, pampered poodles, and homeless vagabonds.
Mat doesn't mind helping out her new friends, but she's frustrated because she doesn't have time to find "Mr. Right" and rid herself of her virginal status. With advice from a colorful homeless lady who claims to have sex with aliens in Central Park, Mat finds her soul mate.
Manhattan Madness is a hilarious, fast-paced story of unique characters and action that will have you chuckling or even laughing out loud until the very last page.

﻿﻿﻿﻿Poor Sabina Sunday! She's 30 years old, 100 pounds overweight, an unwilling virgin, and an accountant in a modeling agency full of lovely, skinny women. To make matters worse, she lives with her nagging Jewish mother, who never lets her forget that she isn't married and is wrong about everything.
But things look up one day when Sabina overhears her boss refer to her as "that fat sausage." That's when she joins Weight Watchers, Jenny Craig, and Overeaters, determined to shed the pounds and change her life. At her very first Weight Watchers meeting, she meets Thomas, a neurotic Italian shrink, who overeats to compensate for his inability to cope with his practice and the mysterious murder of two of his patients.
As they conquer the scales together, Sabina and Thomas's friendship grows, but so do their problems. They find themselves stalked by a killer, and Sabina's mother and her denture-clacking cronies decide to get involved in the investigation, only to wind up in a prison cell filled with colorful prostitutes. You'll ache with sympathy for Sabina's battle with the bulge, shiver as she comes up against a murderer, and laugh as she and the whole zany cast of characters get involved in one outrageous situation after another.

In this hilarious, laugh out loud book, three lovely, mature women decide to revitalize their older husbands by feeding them home-baked cupcakes laced with  sex-enhancing drugs. Unfortunately, the drugs run out and when the doctor won't refill the perscription, the women plan a daring heist at a local supermarket pharmacy, that changes their lives forever.﻿

﻿﻿﻿In this hilarious, laugh out loud book, three young, beautiful, but desperate women convert a mansion into a Bordello-Spa where hunky men service the women and try to make all of their fantasies come true.
﻿﻿﻿﻿﻿ ﻿

Lillian, a gorgeous 35-year-old redhead, suburban housewife, and renowned klutz, is the last to know that her marriage is over. Her husband, Fred, is a skirt-chasing tyrant and Lillian--who is bored to tears tending her home and family--gets herself a job at the small law firm of Galluchi, Galluchi, and Schwartz.This decision starts Lillian off on the road from one madcap adventure to another.

﻿﻿Like the time she joins a client to discuss business over dinner, only to be plied with a meal that's drenched in wine and liquor, then lured up to his hotel room. On another evening, Lillian is dashing out of the Waldorf Astoria Hotel during a fire alarm, wearing nothing more than a towel. If it isn't liquor or fires, we see Lillian jumping out of an exploding yacht into the chilly Husdon River. As Lillian's klutziness keeps getting her into one mess after another, she finally comes to the realization that there's more to life than an unhappy marriage and more to living than the line-up of Tuesday and Friday garbage cans, or men with one-track minds and third-rate jobs. Lillian is finally off on the fast track, to a life that's entirely her own.

Kisses To Die For is an irresistible romp of sexy romance, zany characters, and chilling danger. You won’t put the book down until the very last page. When Angelica (Angel) Collins buys a picture-perfect Victorian country house with every cent of her inheritance, she plans to turn the adjoining carriage house into a quaint café. But the beautiful, naïve young woman soon learns that everything isn’t as idyllic as she expected. The peaceful little town on the banks of the has a serial killer on the loose, her house desperately needs expensive repairs, and it’s haunted by a rose-scented woman and

a scraggly gray cat. To make matters worse, Angel has barely moved in when she meets McLean, a sexy, irritating, marriage-phobic cop whose kisses set her body on fire. But is the devastatingly handsome hunk really interested in her, or is he after the Chocolate Kiss serial killer who’s left his warning silver-covered chocolates scattered on her doorstep?

The Mad House on is a screwball comedy mixed with mystery and lots of romance.

When Merrie Dixon flees from her abusive husband after filing for divorce, she heads to where her brother has rented a room for her in a swanky apartment. Unfortunately, the building isn’t upscale and her roommate turns out to be 4’ 10” eccentric, black ex-hooker named Lulu, who’s decorating business is in the toilet because she only decorates in black.
A few days after settling into her all-black bedroom, Merrie discovers a body stuffed in the basement’s clothes dryer, and the tall red head looks a lot like her. Now Merrie’s terrified that her husband has hired a hit man to knock her off so he can keep all their assets.
To make matters worse, Merrie is the police’s prime suspect, so it’s up to her, Lulu, and her two gay midget friends to find the killer. As the oddball friends try to solve the murder, Merrie finds herself pursued by two very sexy and eligible bachelors, both of whom make her toes curl and her heart race.

In A.R. Alan’s The Flight of Snookems, sizzling romance, rollicking humor, and a chilling mystery unfold at breakneck speed. Red haired, green-eyed, Meredith Dixon is gorgeous and men flock to her like ants to a picnic basket. Unfortunately, so do troubles. Very big troubles, like murder.

Since her move to where she shares an apartment with Lulu, a diminutive black ex-hooker, she’s followed by mysteries and mayhem. First she’s suspected of doing away with Bubbles, a notorious nymphomaniac, and no sooner is she found innocent of that crime, than she’s smack into another mystery. This time it’s Snookems, Lulu’s lover, who suffers an untimely death.
Naturally, Meredith and her wacky team of lovable misfits set out to find the murderer among a sinister cast of mobsters and drug dealers.
This new adventure involving Meredith and her lovable kooky friends is every bit as entertaining as The Mad House on , the first book in this series. 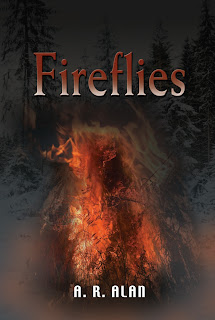 It’s in the middle of a snowy winter, so why is dense, greasy smoke billowing up from a wooded area that’s only frequented by summer vacationers? When the local fire company investigates, lifelong friends, Mary, Emily, and Carla scramble to explain what one of the firemen calls “that delicious smell.”
The truth is that is Charlie, Mary’s husband that smells so good. He’s roasting in the roaring fire, but that’s not all. Emily’s and Carla’s husbands have met the same fate.
But why? In Fireflies, sitting around the blazing bonfire, the three women finally confide in each other, and a spellbinding tale of abuse and sex addiction emerges. You’ll cry with them as they reveal their dark secrets, laugh at their hilarious antics, forgive them their sins, and root for them to escape justice. 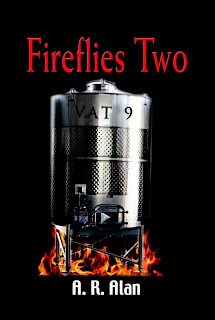 Buckle your seat belt. You’re in for a wild ride in Fireflies Two-Vat 9. In this sequel to Fireflies, A.R. Alan continues the saga of Mary, Carla, and Emily, who’ve killed their abusive husbands and roasted the bodies in a merry bonfire.

They don’t have to wait long to make good on their pledge to help women and children escape abuse. Mary meets a battered little boy, who desperately needs help and enrolls her friends in a plan of action. They march to the boy’s home to demand the parents stop the abuse. They’re too late. Afraid of her husband’s violent bullying, the mother has stabbed him to death.
The husband is a cop, and the last thing that Mary, Carla, and Emily need is the scrutiny of the law. There’s only one solution. They must get rid of the body. That turns out to be harder than they thought. Everything goes wrong, with hilarious results. In between all the wild and wacky drama, romance comes to the three friends and the plot thickens when the First Lady of the unknowingly gets sucked into their escapades.
ISBN: 978-1-61434-707-1

Click here to purchase any of A.R. Alan's books.

The CB Social Club, The House of Cupcakes, Kisses to Die For, Fireflies, and Fireflies Two Vat 9 are all available as eBooks on amazon.com and booklocker.com

View all posts by: A.R. ALAN